TORONTO November 28, 2018 - According to Royal LePage, prices in many key winter recreational real estate markets are experiencing healthy year-over-year price appreciation, as retirees, investors and buyers looking for winter getaways continue to spur demand.
Across Canada, trends vary based on the region. In western Canada, the median price of a condominium in winter recreational regions rose at a faster pace compared to detached properties, while the median price for the latter dipped. In particular, condominium prices in Whistler and Mont-Tremblant (Station) increased 26.5 per cent and 30.0 per cent, respectively. Condominium prices in Canmore also saw significant appreciation when compared to last year, alongside a considerable increase in sales activity.
Quebec’s strong economic performance and consumer confidence have fueled demand for the region’s winter recreational properties as buyers with more discretionary income from within the province put upward pressure on recreational property prices. In Collingwood, Ontario, median prices have also made healthy gains, as residents within Toronto and the Golden Horseshoe flock to the region’s accessible year-round amenities.
“Canada boasts the world’s most spectacular winter experiences. Across our vast land are recreational regions that offer adventure, opportunities for creating priceless family memories and a simple refuge from the hustle and bustle of city life,” said Phil Soper, president and CEO, Royal LePage. “The number of buyers shopping for a four-season recreational property, be they traveling a modest drive from the local metropolis or a jet-setting trip across the pond, is again on the rise, and recreational property values are rising as a result. This is particularly true in the mountainside condominium market as more and more investors seek the convenience of lock-and-leave living.”
Regional Summaries
Alberta 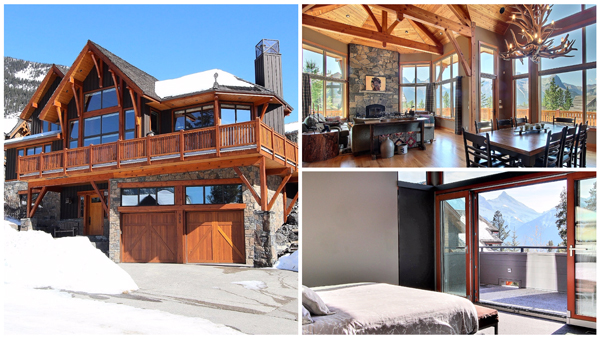 MLS® 47647 | 808 Silvertip Heights, Canmore, Alberta, T1W 3K9 | Royal LePage Rocky Mountain Realty | $2,749,500 |  Listing agents: Brad Hawker & Drew Betts
In Canmore, which is situated a beautiful 20-minute drive from Banff, the median price for a detached home dipped slightly by 1.1 per cent year-over-year to $918,500. In contrast, the median price for a condominium surged 9.6 per cent year-over-year to $472,000.“
We’ve seen more sales activity in the entry-level market this year,” said Brad Hawker, broker and owner, Royal LePage Rocky Mountain Realty. “While most buyers in Canmore are from within Canada, we have seen a slight increase in international demand from the United States and Mainland China.”
Hawker also mentioned that with limited land for future development keeping values intact, it is likely that baby boomers and Gen Xers will continue to purchase recreational retirement properties in the region.
British Columbia
In the Municipality of Whistler, home to Whistler and Blackcomb Mountains, property prices in both the detached and condominium segments have increased significantly. When compared to the same period last year, the median price of a detached property home rose 14.5 per cent year-over-year to $2,400,000, while the median price of a condominium increased significantly, rising 26.5 per cent year-over-year to $610,000.“
More affordable properties are still seeing high demand, despite a slowing in overall activity,” said Pat Kelly, president and owner, Royal LePage Black Tusk. “The B.C. foreign buyer tax and speculation tax does not apply to Whistler, and as such there has been no drop in interest from  international buyers. That being said, recreational properties in the area are primarily bought and sold by individuals who are local to the province, while international buyers only represent a small proportion of sales in Whistler. In 2019, we expect further price appreciation, albeit at a slower pace than in previous years.”
Kelly added that growth in the tourism sector over the last five years has fueled an increased demand for condominium properties, as many buyers are searching for short-term income rental and investment properties.
Meanwhile in Invermere, sales activity has remained relatively stable while the median price of a detached home has decreased year-over-year to $401,250, increasing affordability in the region.“
Recreational properties in Invermere remain affordable and we are seeing an increase of sales in lower-priced properties, which affect the median home value,” said Barry Benson, broker and owner, Royal LePage Rockies West. “Given the proximity of our market to Alberta, if we see economic gains on the other side of our provincial border, it will likely spur consumer confidence among prospective buyers and increase sales activity as we move into 2019.”
Benson added that the British Columbia wildfires also impacted sales activity over the summer months. In 2019, Invermere is expected to experience the same positive uptick in activity.
MLS® # 2424233 | 116 River Bend LANE, Kimberley, BC, V1A 0A6 | $399,000 | Royal LePage East Kootenay Realty | Listing agent: Tara Sykes
Detached homes in Kimberley made the largest median price gain of regions surveyed as demand far outstriped supply. Potential buyers were shopping with less than 40 per cent of the typical inventory level for the region.
“While demand for detached homes in Kimberley is strong as buyers continue to be attracted to the lifestyle offered in the region, median price appreciation also reflects more expensive homes being sold,” said Darren Close, managing broker, Royal LePage East Kootenay Realty. “Buyers looking for a deal in the region should consider condominiums. Not only are they close in proximity to the slopes, overbuilding in previous years has kept this housing type affordable and offers excellent selection.”
Ontario 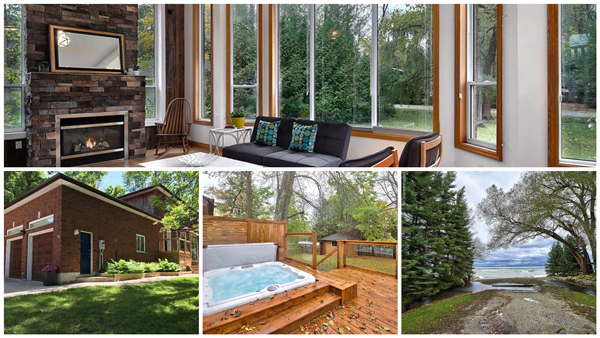 MLS® # 160395 | 30 York Street, Collingwood, ON, L9Y 3Z1 (property located near Blue Mountain) | $719,000 | Royal LePage Locations North | Listing agents: LeeAnn Matthews and Chris Keleher
In Collingwood, median property prices continued to increase in 2018. Detached property home prices rose 6.3 per cent year-over-year to $549,900. Properties in the condominium segment experienced an uptick in value as well, rising 5.4 per cent year-over-year to $407,700, demonstrating a steady demand for recreational properties in the region.“
Torontonians, and those living west of the city in Cambridge, Guelph and Kitchener-Waterloo, make up the largest buyer segment in Collingwood, and the region is seeing increased sales activity from these purchasers,” said Rick Crouch, broker and manager, Royal LePage Locations North. “Recreational property buyers are choosing Collingwood for its year-round amenities, such as access to private ski resorts in Blue Mountain, bicycling clubs and hiking trails.”
Crouch also added that there has been an increase in sales activity in the $300,000 to $500,000 price range. In 2019, the demand for recreational properties is expected to remain steady, as baby boomers purchase these properties for use in their retirement years.
Quebec 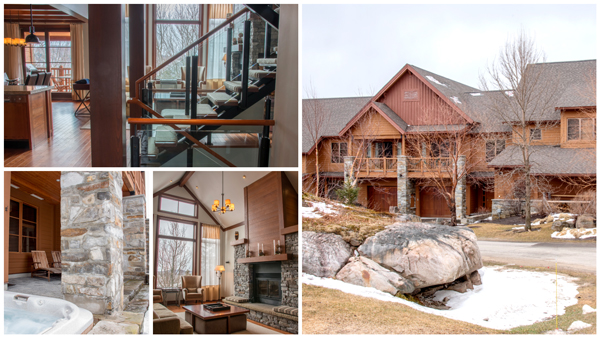 MLS® 22545735 | B1-148 Ch. des Légendes, Mont-Tremblant, QC, J8E 3M9 | Mont-Tremblant Real Estate, a division of Royal LePage | $109,000 | Listing broker: Paul Dalbec
Median home prices in most of Quebec’s Laurentians have risen this year compared to last year. Mont-Tremblant, Saint-Sauveur,Morin-Heights and Saint-Faustin/Lac-Carréare seeing increased demand from Gen Xers looking for a seasonal getaway and to enjoy fresh air just outside Montreal. Demand was mostly seen within the condominium segment this year, as recreational property buyers sought homes that require no maintenance.
Between January and October of 2018, the median price of a condominium at the foot of Mont-Tremblant’s ski station saw a significant increase climbing 30.0 per cent to $325,000, compared to the same period in 2017. During the same period, year-over-year, the median price of a condominium in Mont-Tremblant’s Village rose 8.1 per cent to $186,500 while the price of a detached home increased 1.9 per cent to $425,000. Further away from the slopes, detached property home prices in St-Jovite remained relatively flat, dipping 1.3 per cent year-over-year to $230,000, while the median price of a condominium saw a 2.2 per cent increase, during the same period to $199,950.“
Proximity to the slopes is a key requirement for many buyers. Mountain-side properties are appreciating at a healthy pace, especially in Mont-Tremblant where the resort is undergoing significant improvements,” said Paul Dalbec, real estate broker, Mont-Tremblant Real Estate, a division of Royal LePage. “Mont-Tremblant’s popularity keeps growing as a renowned ski resort, including among international buyers whose numbers are increasing over the years.”
Closer to Montreal, the median price of both detached homes and condominiums in Saint-Sauveur increased 18.9 per cent year-over-year, reaching $305,000 and $270,000, respectively. Fueling these increases is demand from Montreal’s North Shore spreading further into the Laurentians and Greater Montreal Area’s employment growth in recent years. During the same period, Morin-Heights saw detached property prices appreciate 13.0 per cent year-over-year to $315,000. In contrast, home prices in the Saint-Faustin/Lac-Carré area decreased a more modest 4.9 per cent to $173,500.
Although sales should slow slightly in December, Dalbec expects the market to pick up again near the end of January 2019 as buyers return to the market after the holidays. 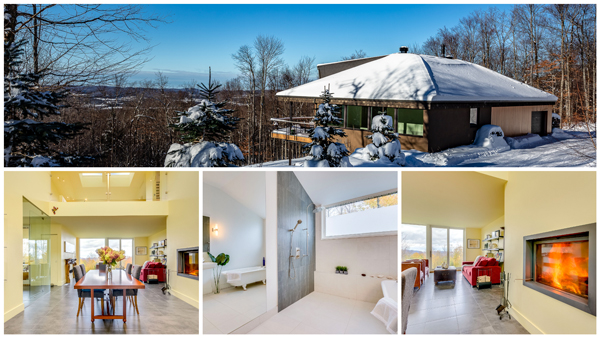 MLS® 27255696 | 848, Ch. Driver, Sutton, QC | Royal LePage Action Courtier | $649,500| Listing broker: Sylvie Careau
In Estrie, the Bromont, Orford and Sutton regions continue to be a prime target for Montrealers looking to buy recreational property. In Bromont, as a result of increasing demand for condominiums, the median price in that segment rose 8.9 per cent year-over-year to $247,500, while the price of a detached home in the region remained relatively flat, appreciating 1.4 per cent to $355,000. Meanwhile, Orford and Sutton single-family home prices rose 12.6 and 10.1 per cent to $295,000 and $345,000, respectively.
“With their proximity to the Island of Montreal and its South Shore with ski resorts and lakes nearby, Estrie remains a popular destination for buyers,” said Christian Longpré, agency owner and real estate broker, Royal LePage Au Sommet.
Waterfront and slope side properties are most coveted by buyers, although these are usually more expensive.
“We are seeing a pull towards slope side condos for families, which is great for ski-in ski-out. It allows parents to sleep in while kids go skiing,” added Longpré. “These types of turnkey properties are selling faster than in previous years. Rather than having to worry about renovating and maintaining their recreational property, owners want to spend as much time as possible enjoying outdoor activities.”
Meanwhile, numerous baby boomers are buying secondary homes with the intention of moving in permanently when they retire in a couple years.
Source: Royal LePage - https://www.royallepage.ca/en/realestate/news/condos-in-canadas-popular-winter-recreational-regions-post-strong-price-gains-in-2018/